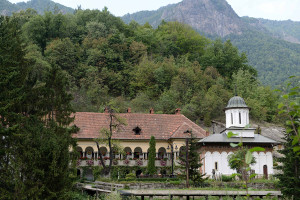 Cozia Monastery is a medieval monastic centre located in Calimanesti City, on the bank of Olt River. It is a foundation of Mircea I of Wallachia, extended and renovated along its century-old history.

It is a hermitage of nuns patronized by the “Nativity of Blessed Virgin Mary”, and it is located on the island of the barrier lake of Calimanesti hydroelectric power plant on Olt River, being connected to Calimanesti-Caciulata health resort with a bridge, at 5 km distance from Calimanesti-Jiblea flag station.
The church is rebuilt on the site of an older church from the 14h century or the beginning of the 15th century, between 1520 and 1521, being the foundation of the ruler Neagoe Basarab and his wife, Mrs. Despina.

It is a monastery of monks, patronized by “Saint George”. Stanisoara Monastery is located at the foothills of Cozia Massif, on its southern slope, on the territory of Calimanesti City, Valcea County. It can be accessed from Pausa-Stanisoara Valley towards North, coming from Pausa-Caciulata flag station, at approximately 6 km distance, or from Turnu train station, towards East, at approximately 4 km distance. 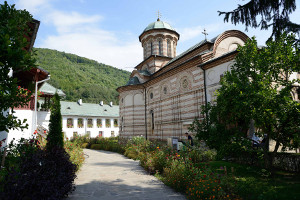 „Sfintii Voievozi“ Church was built in 1711-1715. The church is patronized by the “Saint Voievodes” and it dates from the beginning of the 18th century, being erected in what it was then the middle of the village, on the hill, therefore being called by the villagers the “Hill Church”.

Arutela, the Roman Castra, is an important historical centre of our country, being included, as of 2004, on the list of historical monuments from Romania. It is located between Pausa and Caciulata, nearby Calimanesti, Valcea County.

Cozia National Park is found on the central-southern side of the Southern Carpathians. The boundaries of the park superpose the south-eastern side of Lotru Mountains. The entire area of 17,100 ha of the park is located in Valcea County.
The natural area is located on the eastern side of Valcea County (near the boundary with Arges County), on the administrative territories of Brezoi and Calimanesti and of Berislavesti, Perisani, Racovita and Salatrucel, and it is crossed by DN7 national road, which connects Ramnicu Valcea with Talmaciu.
A special characteristic of the region are the thermal springs, due to which an entire spa network has developed here, the best known resorts being Calimanesti and Caciulata.

The library dates from 1950, holding approximately 2000 volumes, operating for 20 years as the library of Calimanesti Resort in the current location, at the first floor (the building dates from 1924). In the patrimony of the library there is a collection of over 470 signed books, some of them donated by the writers, others already being part of the collections of the library.

Lotrisor Gorge and Waterfall are located in Lotrisor Valley in Carpathian Mountains, being included in Cozia National Park. Lotrisor Waterfall is an artificial waterfall made in 1967, when the forest road was built. Due to the fact that it was not possible to arrange the access road because of the water, the workers captured the stream in a 300 meter tunnel dug into the mountain. The tunnel can be accessed from behind two rocks, descending five meters deep on the improvised stairs. Here there can be seen the small upstream waterfalls and the panorama of the tunnel dug in the mountain rock. A tunnel through which the river is winding and, after reaching the edge, it falls into the 50 meter high waterfall. Thus, it is the only waterfall from Romania whose waters pass through a tunnel dug by man before reaching the ground.

The variety of mineral waters – with regard to chemical composition (sulphurous, chlorinated, sodium, magnesian, iodized etc.), the mineralization degree (oligomineral, hypotonic, isotonic, hypertonic), temperature (cold and thermal) – and their curative effects in digestive, kidney, metabolic, rheumatism, allergic, dermatological diseases, determined, as of the end of the 19th century, the European notoriety of Calimanesti Resort based on the medals obtained at the Universal Exhibition from Vienna in 1873 and the gold medal and “Grand-Prix Diploma” obtained at Brussels in 1893.

The list of historical monuments for Calimanesti-Caciulata-Cozia area comprises a significant number of places of worship, monasteries, industrial buildings, dwellings and commemorative crosses. As ensemble, there is Calea lui Traian, the main thoroughfare of Calimanesti City, which crosses through Caciulata and Calimanesti.


We invest in your future! Project selected in the Regional Operational Programme and co-funded by the European Union through the European Fund for Rural Development.

The content of this material is not necessarily the official position of the European Union and Romanian Government.
For detailed information about other programs financed by the European Union, please visit www.fonduri-ue.ro.